It is coeliacs awareness week in New Zealand (7th - 13 June 2021), so I thought I would do a little blog post about coeliacs disease.

Our potiki of the whanau is currently going through the diagnostic processes to find out if she has coeliacs disease. We have not had the small bowel biopsy for diagnosis but due to her clinical symptoms and blood and stool test results we have been told she likely has coeliacs disease. I remember as a radiographer learning a little bit about coeliacs and inflammatory bowel disease and the radiologic procedures that can be done to aid diagnosis. Since Taeo's diagnosis I now have a deeper understanding of what Coeliacs is and how gluten can be severely detrimental to individuals with this disease.

Taeo was recently (April 2021) admitted to starship hospital with Hemolytic Uremic Syndrome, it was such a scary time for us however in a weird way it was also a blessing in disguise as she had a blood test which also showed she was deficient in iron, vitamin d, b12 and calcium. One of the many symptoms in patients that have coeliacs. As a whanau, we have removed gluten from our diets. Since the removal of gluten from Taeo's diet we have noticed a marked difference in her energy levels, her nutritional deficiencies are at normal levels and she is now consistently gaining weight. We have a follow up appointment with the pediatrician in due course to see how she is progressing. As a whanau, we have only just begun our journey with our gluten free lifestyle. So far, it has been an easy switch but I know that we will be hit with some challenges, such as family functions or birthdays and trying to explain why she cannot have the sandwiches, birthday cake or treats on the table. So the purpose of this blog is to create awareness for people that may not be aware that gluten given to an individual with coeliacs is very serious.

What is coeliacs disease?

Coeliacs is a serious autoimmune condition. People affected with coeliacs disease have a permanent dietary reaction to gluten which damages the micro-villi of the small intestine. This causes flattening of the villi, the villi are tiny finger like projections which breakdown and absorb nutrients from food. When the villi are damaged and flattened this decreases the surface area of the bowel which interferes with the absorption of nutrients from food. This can manifest as vitamin and mineral deficiencies in individuals affected.

Research indicates that a large majority of people that have coeliacs are undiagnosed and unaware they have coeliacs. It can be extremely difficult to diagnose because it affects people differently. Some will develop the disease as a child, others will as an adult, the reason for this, is still unknown.

Coeliacs disease can develop at any age after people start consuming food or medicines that contain gluten. Left untreated, coeliacs disease can lead to additional serious health problems and complications such as small bowel cancer.

According to the world health gastroenterology organization. Coeliacs can be classfied into two types; Classical coeliacs and non-classical celiacs.

Classical Coeliacs: signs and symptoms of malabsorption, including diarrhoea, steatorrhoea, weightloss and growth failure in children.

Silent Coeliacs: Patients have no symptoms but will still display atrophy of intestinal villi. However, patients have reported that after commencing a gluten free diet, there has been a marked difference in abdominal bloating, distension and flatulence. 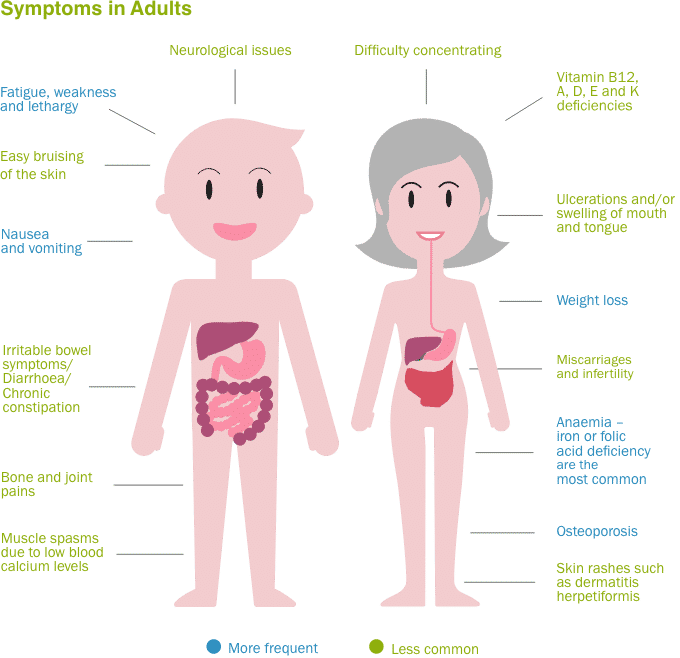 
Generally symptoms will not show until gluten has been added into the infant or child's diet.

A medical diagnosis of coeliacs is key to managing the condition and improving your health. A chat with your doctor about your symptoms is your first point of call. It is also very important to mention if a first degree relative has coeliacs. Due to the variable presentation of coeliacs it can take some time before the condition is suspected and diagnosed.

Blood Test : A blood test or coeliac serology will measure antibodies in the blood which are typically elevated in individuals with coeliacs disease. It should not be used for diagnosis alone. In children that have typical symptoms the diagnosis can be made without the biopsy. However, this needs to be discussed with a paediatric specialist

Small Bowel Biopsy: This is performed by a gastroscopy procedure whereby several tiny biopsies are taken from the small intestine. Biopsies will be examined to see if villous atrophy is present. A small biopsy should only be done when gluten has been present in the diet. If gluten has already been removed from the diet, a 'gluten challenge' must be performed before the biopsy is taken. A small bowel biopsy is the gold standard for diagnosis of  Coeliacs Disease.

Genetic Testing: HLA DQ2 & HLA DQ8 are genetic markers that can be associated with coeliacs disease. These can be tested with a simple blood test. This test is extremely helpful when the diagnosis is uncertain. A negative bloody test more or less rules out coeliacs as more than 95% of people with coeliacs will have one of these markers present. However, it must also be noted that a single postive blood test should not be the only test used for diagnosis.

Computed Tomography: There are some tell-tale signs that are specific to celiacs disease that present on abdominal CT scans such as Jejunoileal fold pattern reversal. Although CT is not necessary for diagnosis, it may aid diagnosis in some patients that present with unspecified abdominal symptoms without a definitive diagnosis that have been sent for CT imaging.

Unfortunately coeliacs is a life long disease and there is no cure. The only available treatment is a life-long gluten free diet. When gluten is removed from the diet, there is typically complete recovery of nearly all symptoms. Recovery is directly dependent on the strict adherence to the gluten free diet.

For people with coeliac disease, less than a crumb of gluten can damage the gut and cause symptoms and this is why cross-contamination should be avoided when preparing meals.

Help spread awareness about those living with coeliacs disease and how important it is to live a gluten-free life.